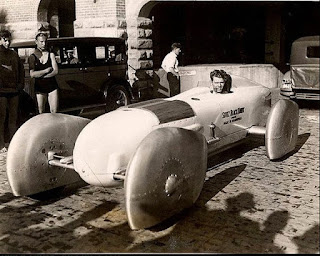 After reading a couple of books about the early days of the automobiles, I decided to drag a couple of them dealing with the early days of racing out of my own library. One of the books I've had for years but had only read it like it was a Playboy - skimmed the copy and ogled the photos. The other one I'd read but figured it was worth another look. Lo and behold, both books had the Stutz Black Hawk Special in them. This car was really something. Unfortunately, it crashed while attempting a speed record destroying the car and killing the pilot. However, I'd love to build something along these lines.

The one book has some details on the car - length, width, wheelbase, etc. After doing a little Internet snooping, there are already two replicas of this thing in existence, one of which is supposed to be located in the Stutz Building in Indy. I know right where that's at - same exit that we take to go to the Gloves. I don't know what that one has for locomotion but I should take a trip this summer and see if I can get a look at it.

I can see me building something like this with a Slant Six, a straight axle up front, maybe some 18" wheels with the Firestone Half Tread tires, drum brakes on the rear, discs on the front. A quick-change rear would be nice - expensive - but nice. Could probably source most everything from the Speedway catalog.

I need to hire someone to do all my chores so I can just piddle around with projects all day long. Or better yet, find some genius like Leo Goosen to draw me up some prints so I could just make parts instead of sweating the details. Might actually be able to finish it that way.